Engr. Luna Manrique, MPDC of Boac, posted in Facebook on August 20, 2016, “It’s not over yet, abandoned Marcopper mine site continues to pollute Boac River up to this date.

I requested the Army CAFGU to patrol the area last August 17, 2016 and take pictures with GPS reading. The newspaper they used as date mark was issued only last August 16, 2016.

Leaving the mining site without cleaning up the remaining mining waste and polluted sediment, and without taking appropriate measures to stop the flow of acid mine drainage from the basins and ditches left behind is very irresponsible act of the mining company. “Until the ongoing pollution at the MARCOPPER Mine site is adequately addressed, it continues to pose a threat to water quality, and the communities and wildlife in the area that depend on clean water.” I had already informed the DENR on this matter and we are waiting for their team to inspect the area.” 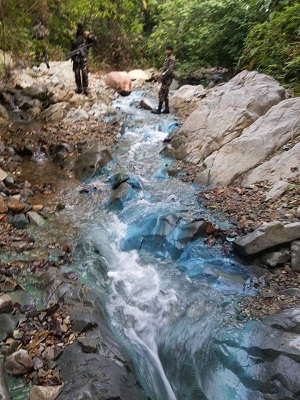 No, definitely it’s not over and may not be over still for quite some time. For who could even grasp the magnitude of such a high form of deception committed against the people of Marinduque when the study that cost P20-million to identify issues on the environment, health and engineering, was deliberately hidden from scrutiny of the same people whose lives are directly affected and/or endangered?

We the people were simply ‘kept in the dark’, (a phrase that has characterized these issues since the beginning of time), that we really had no inkling on the seriousness of the situation, what has been happening, and other safety and health concerns that ever confronted us yesterday, today and tomorrow!

It is quite revealing that the MPDC of Boac, Engr. Luna Manrique, who is obviously very knowledgeable on this subject as compared to us ordinary citizens, would express his disgust and surprise that nothing has been done to stop the flow of acid mine drainage from the basins and ditches left behind. That’s simply because of the fact that these issues and concerns were never properly presented to us, Marinduquenos all this time.

The only conclusion one could arrive at with new facts coming to the fore is that while we were praying for the dams not to collapse with images in our mind of people drowning, screaming, we were just being more evilly killed slowly, slowly pala all this time with the continued acid mine drainage overflow coming from those pits of hell. We were just slowly and surely being covered with those waste dump piles spread in the vast expanse of the Marcopper site continuously flowing into our rivers and into our water.

And we’re not talking here about the millions of cubic meters of tailing that have already remained embedded into our rivers and shores. This is what the scientists warned us about in 2004 that only the very powerful apparently knew and just kept to themselves. 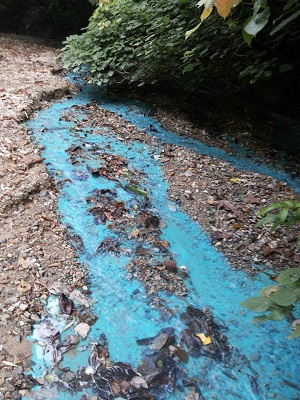 Again, as previously posted here, the 2004 study of the Independent Assessment Team that was maliciously hidden from public scrutiny and discussion, already emphasized the need to immediately address two specific items:

1). Acid-rock drainage from the Tapian Pit overflow and from mine waste piles into the Makulapnit, Bol and Maguila-guila rivers, and

2) Erosion of mine wastes into the siltation impoundments on the Makulapnit, Bol, and Maguila-guila Rivers.

Further, they merely added that potentially imminent failures of the Makulapnit, Bol, and/or Maguila-guila Siltation Dams, coupled with the continued large-scale erosion of mine wastes into the siltation impoundments behind the dams, increases the likelihood of potentially catastrophic releases of large volumes of mineralized, acid-generating mine wastes into the Makulapnit, Bol and Maguila-guila rivers. These releases according to them would be similar to the release that occurred in 1993 from the failure of the Maguila-guila siltation dam.

With the kind of flash floods that have hounded our barangays over the years, heavy landslides during severe flooding along the path of the Boac river system, the contamination of our water with toxins and untold health related concerns confronting our people, only the hopeless deniers bent on controlling their hapless victims would claim that all these have anything to do with the current state of abandonment of the mine site and its structures, two-decades long now. That all these have nothing to do with the practice of deliberately keeping our people uninformed. Ignorance is bliss, they’d only mockingly mutter.

The ball’s in your court now, the new DENR. No more superficial moro-moro inspections and monitoring please that only succeed in avoiding to touch these very clear and unmistakable issues!