The Philippine Travel Operators Association (PHILTOA) – Philippine Travel Mart is a venue for all accredited tour operators, travel agencies and airlines to promote their agencies, travel destinations and domestic products of all provinces and regions in the country that has accredited travel and tour agencies and airlines. The different cultures, history and traditions are also presented during the 3-day event. Luckily we have Dream Favor Travel and Tours in the island – it is our entry point in this travel mart that made it possible for Marinduque to be more recognized by major travel and tours agencies around the country and abroad and by frequent travelers around the world, as a new travel destination. 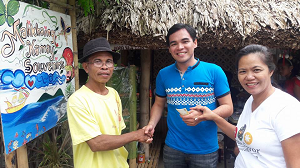 This year’s participation of the province differs from our first one. The local government units joined Team Marinduque by giving financial support this time. The Provincial Government of Marinduque paid for the rental of the space where the Marinduque Pavilion was placed with the amount of Php 195,000.00. The different municipalities gave their counterparts and was paid to the accredited contractor of Philtoa for the construction of the pavilion which amounted to Php 200,000.00. The distinct tourism destinations were promoted and not just in the Mimaropa region, but globally.

The Team was so thankful to the five municipalities that made up a sum of Php 160,000.00 (Boac – 50,000.00, Torrijos – 50,000.00, Mogpog – 30,000.00, Gasan – 30,000.00 and still awaiting Sta. Cruz’s pledge of 15,000.00). Good thing we got the support of the Philippine Chamber of Commerce – Marinduque, Inc. (PCCI-Marinduque, Inc.) this year, spearheaded by Dir. Elmer and Ninay Tan, President Owen Pinon and Treasurer Sally Sulit who have helped expedite the process of releasing the cheques to be paid to the contractors. Individual hotel owners and some leading businessmen gave their shares also. All these made possible the completion of the pavilion and was contributory to the success of this event. 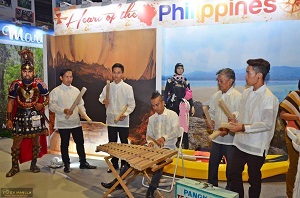 The Kalutang Group of Marinduque was the newest attraction in the pavilion. People can’t help but turn heads and go back to see where the unique sound was coming. Stunning as the Kalutang appeared with their formal Filipino attire (Barong Tagalog) surprised visitors that the sound came from talented and well-dressed kalutang players headed by a brilliant local musician, recognized by the National Commission for Culture and the Arts, Maestro Tirso Serdena. So amazed, there were some who ordered the wooden xylophone made of kwatingan wood that is also use for the two pieces of wood that make sounds and notes and to the master pieces of Maestro Tirso. Some may claim they also have 2 pieces of wood and which create sounds but what makes our kalutang original are the notes Maestro Tirso created not just to create sounds but to be able to play melodious music and even common folksongs. 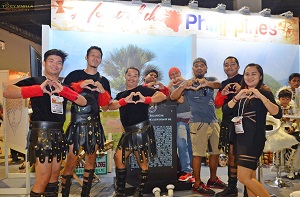 For the more than 300 participating booths, Morions of the Kapatirang Moryon and the Legion of the Marinduque Morions Association were the number one crowd getter for photo ops. Morions of Marinduque are the dressed like the Roman Soldiers who act with the cast of the world-renowned tradition of Marinduque during Holy Week called, Senakulo – a play depicting the life and passion of Jesus Christ. The original morions were those with flower headdress whom we hope to be with next travel mart.

Department of Tourism Regional Director for Mimaropa, Atty. Minerva Morada personally came to the booth and expressed her appreciation to Team Marinduque for exerting all the efforts in coordinating with all its sponsors and partners to make this project a success. The team is so grateful for the support and presence of Cong. Lord Allan Velasco, Mayor Roberto Madla of Boac, former Mayor of Boac, Pedrito Nepomuceno and the Municipal Planning & Development Officer of Boac, Eulogio Luna Manrique who graced the occasion during the opening day and visited Marinduque’s pavilion.

Initially, one would say the travel agency is the immediate beneficiary of this travel mart but surprisingly, the local producers/manufacturers are the ones getting sales at once. Yes, there are bookings for travel but not as immediate as product selling like the local and recycled lamps from Balanacan, Mogpog which we consider as always one of the best sellers of Marinduque, the arrowroot cookies from Sta. Cruz, Buntal bags, carvings and painting from Bagumbungan, Sta. Cruz, Dried Dilis of Mogpog and Human Nature Crystal Oils and Coco Rubs made of Virgin Coconut oil from Gasan. For sure there are other products of Marinduque like the nito and abaca products that should be included next time.

Indeed, tourism development does not just concern the tourism destinations; the travels or transport but in a total package it includes the food, the souvenirs, the accommodation, the happy people who serve and a lot more.

Are we ready or not? Should this be the question or should it be? When are we going to be ready for tourism in flock? What is there to expect in a booming island like Marinduque but a promise of pristine waters, simple, laid back and just naturally magnificent lifestyle in a panoramic location, that’s our island but just as it is, it is very rich in natural resources and it is the geodetic reference center of the Philippines. These alone makes one proud to say, “I’ve been to the center and the heart of the Philippines!”

Investors may come and may help us get ready for more tourists to come. We let them see where we are, honestly at present and from there find ourselves and the island developing with partners not just from domestic but international. Development is a process and it could be a long one but with the support of everyone concerned in tourism industry, we will be the next travel destination to beat. 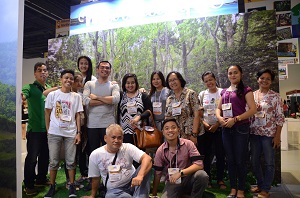